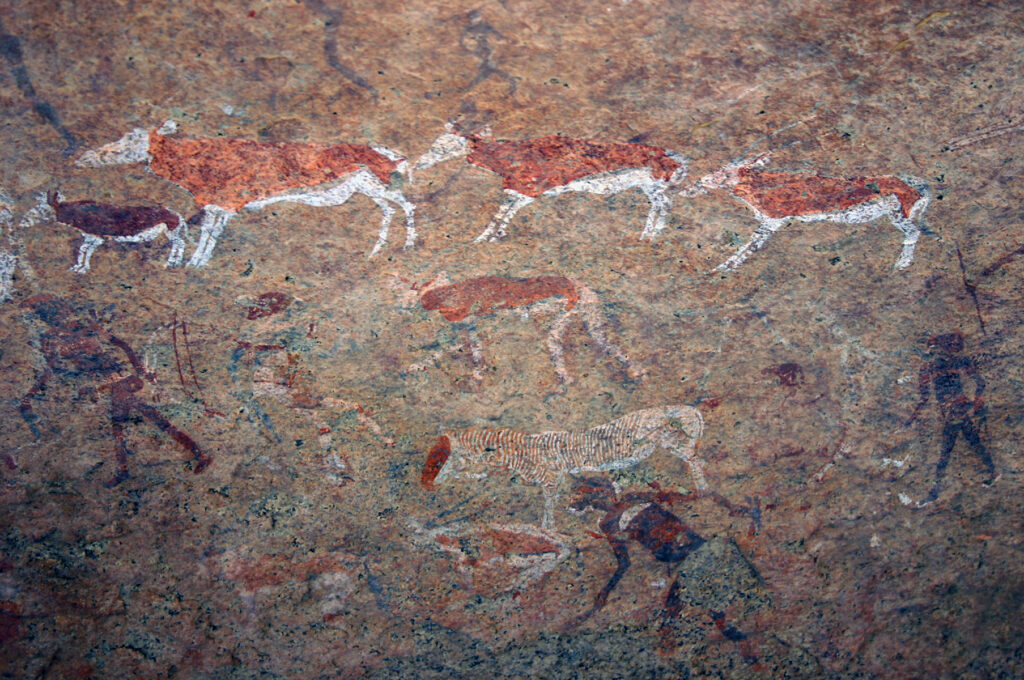 A few years ago in a session of The Story Compass, a participant asked me, “Don’t you think storytelling is a bit primitive? I think we’ll evolve past it, communicate in a more sophisticated way.” My first thought was, “Whoah! Slow down buddy. You just called the whole course into question!” Then I thought about it some more because his idea was challenging AND interesting.

He has a point using the word primitive. It was, after all, primitive humans who came up with the story in the first place. No one could write down Gurth’s tip and tricks for avoiding a sabre tooth tiger attack and refer to them later. They had to figure out a simple way to capture, remember and retell that information. Story structure, metaphor, and archetypes were the tools they devised to do that.

So it could be that storytelling is primitive. But there is another possibility. That it was storytelling that allowed us to evolve into the sophisticated beings that we are today, and it is stories that will ensure we beautiful humans continue to evolve.

A computer can’t tell a story. AI can’t put words together in a way that connects to my deeper emotions and the essence of what makes me human. Human beings can. And there is a reason.

There’s another aspect of storytelling that makes it pretty sophisticated. Its direct impact on our ability to feel empathy and compassion. As advanced as it is, my MacBook can’t imagine what I’m feeling right now and put words together in a way that will validate how I’m feeling and make me feel less alone. A human can. We have an empathy “muscle” built right into our brain (the anterior insular cortex, for the brain nerds out there). And that empathy muscle gets stronger when we engage with storytelling. Spend one hour reading Tolstoy and you’re likely to relate a bit better to the next human you meet, and treat that human with a bit more compassion.

Finally, stories help us to imagine new possibilities. Your computer can’t imagine a new way of laying out a Word document, paint you a picture of how that will improve your work day, organize a team around the vision, and then take the steps to make it happen. Humans do that without thinking twice about it. And if we engage with fiction we get better at it. You can educate your imagination and the easiest way is to read stories.

All of that points to the fact that storytelling is pretty sophisticated and has a powerful impact on our ability to do great work. Stories help us to: intelligently organize information, respond with empathy, and imagine creative possibilities. Sounds like a good set of leadership traits to me.

Have you exercised your storytelling skills lately? It might be time. Here is an easy story workout plan for the busy business person:

Like my course participant, we might tell ourselves storytelling has no place at work, or think it’s a primitive piece of window dressing to pretty up an idea. Deep down, though, I think we know that even though we’re presenting on Zoom, meeting with C-suite executives, or selling a technical piece of equipment to some savvy buyers, we’re not all that different from Gurth, using some berry juice on the cave wall, hoping everyone connects to his story, pays attention to what’s important and remembers it for next time.